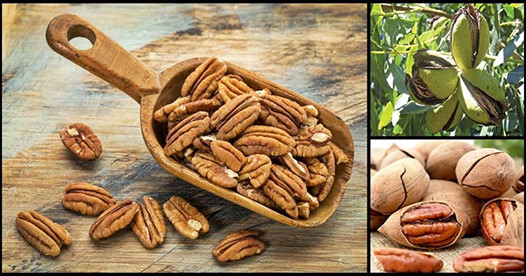 Pecan nuts are the product of a pecan tree, native to the south-central region of the United States and Mexico. The name pecan is an Algonquin word that translates to “nut that requires a stone to crack.”

Easier to crack than a walnut, but comparable in some ways, pecans are a little longer and more slender. Their flavor is similar to a walnut but smoother. The pecan has an unmistakable buttery quality to it.

The high levels of monosaturated oils found in pecans are responsible for that rich butteriness. With a fat content of over 70%, pecans rank highest among all the nuts.

An ounce (about 20 halves) of pecans contains the following:

3 g fiber (as much as fiber as a small apple)

60 percent of the recommended daily intake of manganese

15 percent of the recommended daily intake of zinc

Pecans are also cholesterol-free and a good source of copper, vitamin A, B1 and E, magnesium, manganese, calcium, phosphorus, and zinc. They are also rich in ellagic and oleic acids which act as antioxidants and cancer fighters.

Zinc is a vital mineral that plays a role in wound healing, cell division, and cell growth. Copper is necessary for nervous system function and the formation of connective tissue. Manganese is important for brain function, as well as the carb and fat metabolism.

How Can Pecans Promote Health?

Studies have found that consuming a handful of pecans a day (about 1.5 ounces) can reduce cholesterol by about 10 percent, thus reducing your risk for heart disease. The main reasons for the pecan’s cholesterol-lowering properties are its omega-6 and omega-3 fatty acids, as well as a phytochemical called beta-sitosterol.

In an analysis by the US Department of Agriculture, pecans were ranked highest among nuts in antioxidant capacity. This is thanks to their richness in polyphenolic antioxidant ellagic acid, beta-carotene, vitamin E, lutein and zeaxanthin. These can all fight the free radicals that cause many diseases, including cancer and heart disease. Lutein and zeaxanthin both act to protect the eyes against macular degeneration. Ellagic acid protects the DNA from certain carcinogens that may be found in food.

In a laboratory study from Purdue University, the results indicate that the presence of gamma-tocopherol, a type of vitamin E found in pecans, can kill prostate cancer cells without harming healthy cells. In other cancer news, a one-ounce serving of pecans has 25 percent more oleic acid than a one-tablespoon serving of olive oil. Oleic acid has been shown to help suppress the activity of a gene that is thought to trigger breast cancer.

Studies have also revealed that pecans can effectively treat the symptoms of benign prostatic hyperplasia. This is a non-cancerous enlargement of the male prostate gland. Beta-sitosterol is a plant compound that has been shown effective at shrinking prostates. Enough of it is present in a handful of pecans, to make it noteworthy… definitely worth adding to one’s diet as a preventative measure!

Who knew the pecan had such a solid nutrition profile! I think we just found a way to justify more pecan pie in our lives.

Lots of magnesium supplements cause stomach upset and even diarrhea. Our myKore Essentials Topical Magnesium spray not only to ensure that I am getting the proper amount of magnesium my body needs to function optimally but also to help with pain, sleep and the occasional migraine